Variables are the foundation of programming. To represent anything in your game, be that player’s name, health status, how much ammo you have left and so on, you need variables.

As you can see from the few examples I mentioned what we can represent with variables, you already know that these variables are numbers and characters.

Before we start to write any code, let us create our first script. In the project tab Right Click -> Create -> C# Script: 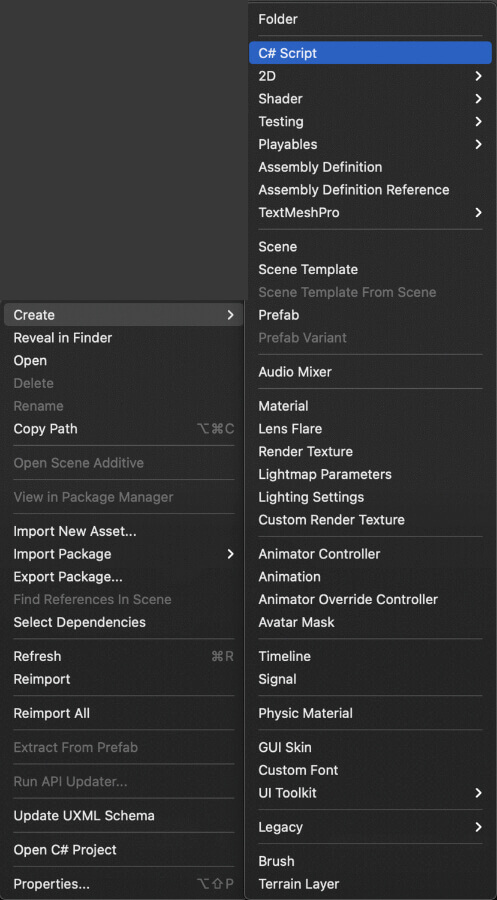 As soon as you create a new script in Unity, you will be prompted to give it a name. Give this script a name: LearningHowToProgram

The name itself is not important for our lectures that will come in these posts, but later when you start creating your game you will give meaningful names for your scripts.

These names represent the task for which you want to use the script such as PlayerMovement, PlayerAnimation, EnemAI and so on.

Double click the script and this will open it in Visual Studio: 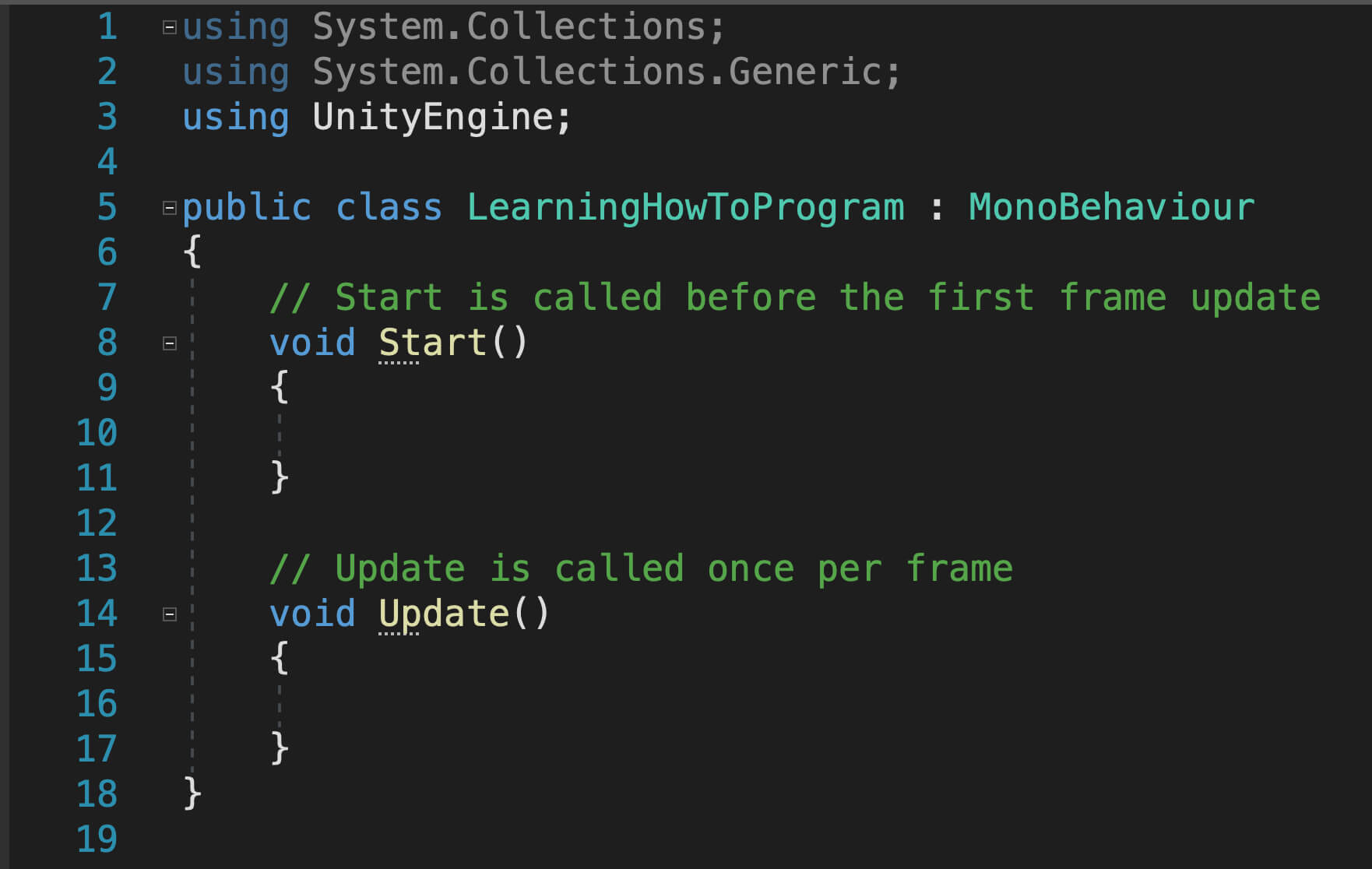 We are not going to go through every part of the script to explain what everything represents, but what’s important for us at the moment to understand is that the Start function that you see is used for initialization of your script.

For example, if you want to calculate some values before your game starts, then you would do that in the Start function. Later down the road we will discuss the initialization functions in more depth, because there are in total 3 functions that serve this purpose.

The reason why I mentioned Start now is because any code that we want to print to the console as an example, we will type it in the start function. Now we can jump into the juicy parts and finally introduce variables.

As we already mentioned variables are numbers and characters, but there are multiple types of variables that we can use, such as whole numbers or decimal point numbers. So the first variable that I will introduce to you is called a float:

Type this line of code above the Start function so that you have something like this:

All variables that we want to use inside the specific script we will declare above the Start function or to be more precise right below the public class declaration.

We will see more examples of that, but now let’s talk about the structure of declaring a variable and break down the line of code that we wrote.

When declaring a variable, we first give it a type, then we give it a name, and optionally we give it a value, same as what we did with the float example:

The variable type and name are mandatory when you want to declare a variable of any type, but the value is optional which means that you don’t have to give your variable a value right away, you can calculate it later during gameplay.

The variable that we declared in this example is called a float, and it represents a decimal point number.

The compiler will add .0 at the end of that number when it’s ready to use it and you don’t have to do any extra work. If we were to declare 100.5 then we would have to specifically add .5 at the end of the number.

The “f” suffix at the end of the declaration is used to denote that this number is a float type number. This is because we have another variable type that also represents decimal point numbers which is called a double, and this is how we declare it:

Again, you will notice the same signature, we first declare the variable type, then the name then we give it a value.

In this example you see that we gave our double a value of 100, but we didn’t add f at the end. The compiler automatically knows that this number is a double because we specified that with the variable type, and we don’t need to add f at the end.

Same as with the float, you can omit the .0 at the end, but if you have any other value other than 0 as a decimal point number then you must type it.

From all the research that I did, I came to the conclusion that the main difference between the two variables is that the double is more precise when it comes to the decimal point numbers.

These examples are rough examples as I already mentioned, or better yet, this is me trying to use human language to explain the difference between the two variables as best as I can, but for the majority of our development we will use floats to represent decimal point numbers in our projects.

I’ve been using Unity for 7 years and not once have I used a double to represent a decimal point number.

Moving forward, the same way how we have decimal point numbers, we also have whole numbers and they are called integers. This is how we declare an integer variable:

int is short for integer, and that represents the variable type, then we give it a name and after that the optional value. Integers don’t have any letters that you can add at the end of the variable declaration so we just give it a value we want and that’s it.

Next we have a string variable which is a character type variable, and this is how we declare it:

string is the type of variable, so we declare it first, same as with the other variable types, then we give it a name and an optional value.

It’s important to know that anything you type between the quote marks will be counted as a string variable, so if you type space, this counts as a character, which means that

is not the same variable as

so keep that in mind.

The last variable that we have is called a boolean, and this a variable that can only have true or false as its values. This is how we declare it:

bool is the type of the variable, isAlive is the name and true is the value. We can also type false instead of true, but these are the only two values that the boolean variable can have.

This is because booleans are used in conditional statements that can only be true or false, and we will see many examples of this.

Another thing to note is when using C# and Unity you will use a camel case way of writing variable names, such as isAlive.

The name of the variable starts with a lower case letter then every beginning letter of every new word in the variable name is capitalized such as Alive in this case.

The are also other naming conventions that you can follow such as using underscores and giving your variable a name like this:

We will use both of these examples in our development so you will get used to it.

After you declared all of these variables this is how your script should look like:

This would be it when it comes to variable types that we can use to develop our games and these 5 types of variables are the foundation of any game that you will create.

You probably noticed the words above the Update and Start functions when you created your script:

These are called comments and they are not counted as lines of code.

This means that you can write anything you want in the comment and they are primarily used to document code.

You create comments by typing // and after that you can add notes that will help you understand what your code is about when you come back to it after a few months.

One thing to note is that don’t overdo the comments and write paragraphs about what your code does, instead use few words that describe what your code is doing. For example:

Where To Go From Here

In this lecture you learned about the most essential part of every game that we will create – variables.

To continue your learning journey you can take a look at our Math Operations With Variables Lecture which is the next lecture in this tutorial series. 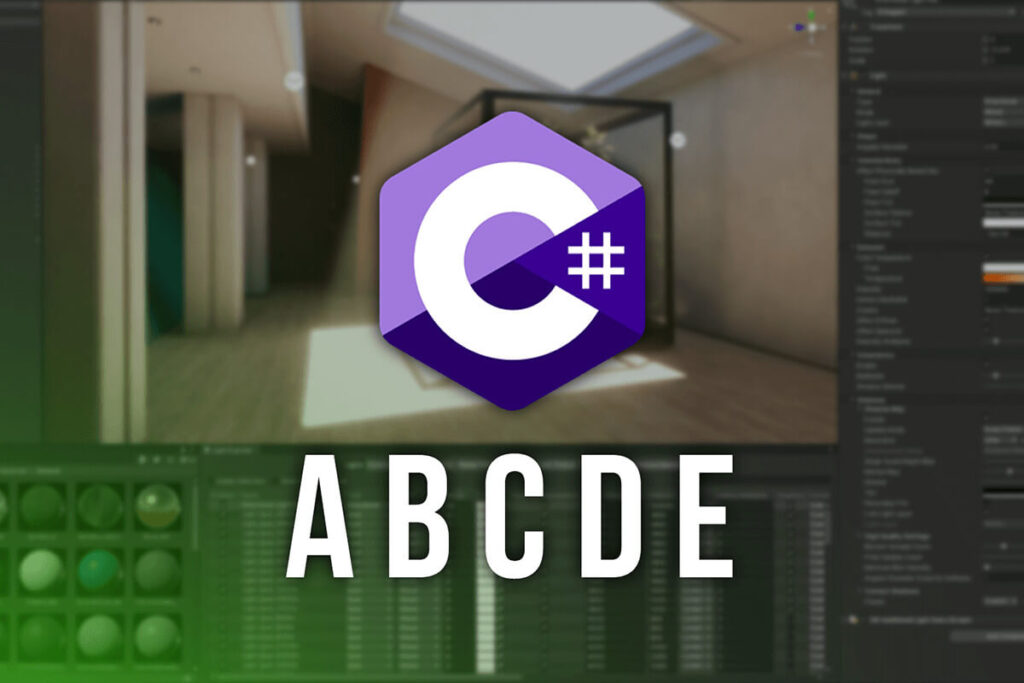